I came across an article in the Indianapolis Star yesterday about the Carmel City Council and a proposed project for "low-income housing." What's happening? There is speculation (now confirmed by Mayor Brainard) that Pedcor Development is planning to build a Section 42 affordable housing project on the spot where an old grain elevator once stood just across the Monon Trail, just a few blocks south of Main Street. 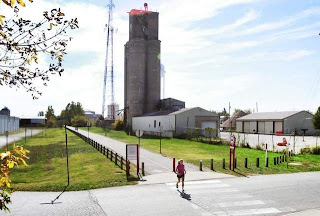 Keep in mind that Carmel's Main Street is the city's prime location for high-end shops and restaurants as well as art galleries and high-rent apartments. The concern is that "low-income housing" will be a detriment to the city's downtown improvements. Councilwoman Luci Snyder is quoted as saying, “My concerns, for this or any other project in this area – just north of City Center and the Palladium, and south of the Arts and Design District – is that whatever is proposed is of high quality both in design and materials... The citizens have hundreds of millions of dollars invested in these two areas and what we approve must enhance what we already have."

As with many things in the news, I'm always looking at the words being used. The key phrase being "low-income housing." Because, as one thinks of "low-income housing," the next word-association can become 'poor housing'. And then the train of thought naturally tracks to concerns about property values, home equity, and ultimately what can real estate be bought and sold for? --- All real estate issues that I deal with everyday. --- You can see this thought-progression played out just by taking a quick glance at the comments after the story.

The first problem is the phrase, "low-income housing." The second problem is a general misunderstanding about Section 42 (not that the average person can be blamed for this / we can't all be experts on every government program!).

About Section 42. FYI, there is a difference between federally subsidized Section 8 housing (which was mentioned several times from the story's commenters) and non-subsidized Section 42 housing. Section 8 is not being proposed here and isn't an issue. Section 42 utilizes tax credits to provide rent-controlled affordable housing. Meaning, there is a rent-cap in effect which is in proportion to its average income. In return for the tax credit, the units must be rented to people at or below 60% of the average, local median income. For Carmel, that's about $120,000. On my calculator, 60% of $120,000 is $72,000 --- I'm sure everyone has different standards of living, but $72,000 per year doesn't seem to me as being "low-income", does it?

By the way, regarding the quality of design and materials: in terms of exterior aesthetics, check out Avondale Meadows near 38th Street & Sherman Avenue.  Although, Carmel would most likely have higher income requirements given the area (remember: the rent-cap is a relative number to the average income), at a minimum, it's a nice example of what such a development in Carmel could potentially look like.

About the phrase, "low-income housing". As a REALTOR®, I am for Equal Opportunity Housing. For the home-seeker, that means that one can expect homes in their price range made available without discrimination. For the real estate professional, that means they are prohibited by law from discriminating on the basis of race, color, religion, sex, handicap, familial status, or national origin. The rub is that the income-basis is too often shaped (unfortunately) by all of the above.

I'm just a real estate agent. I don't know how to solve the problem of income-stratification. I do know about property values, home equity and what you can buy and sell your house for. I also know about the importance of Fair Housing. That it's not only good for people. It's good for business --- Because Equal Opportunity Housing leads to stable homes, which  leads to healthier families, which leads to kids staying in school, which leads to college degrees, which (crossing my fingers) leads to jobs and even job-creation. Which (voila!) leads to higher property values, more home equity and more cash to the seller at closing...

No, it doesn't work perfectly like that all the time. But, it can. And, it does.

I just want to be mindful about how the phrase "low-income housing" gets tagged to Section 42. Especially, when we're talking about those of us making $72,000 per year. Just a little perspective.

Posted by Unknown at 1:40 PM No comments:

I first came across the Cottage Home neighborhood about ten years ago when I started working in downtown Indianapolis. I really enjoyed taking the back-streets on my early morning and rush hour drives to and from work --- It was a trip in time, driving by houses built 100+ years ago. In so doing, I came across Dorman Street, North Street, and Highland Avenue. Most Indy-philes know about the Lockerbie Square and Woodruff Place neighborhoods, but I think the smaller Cottage Home gets seemingly lost behind the I-70 highway. 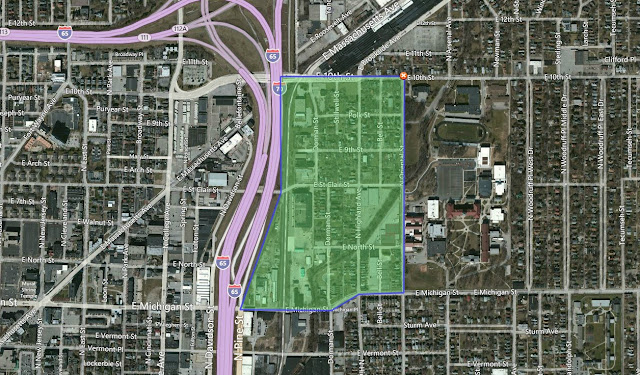 East of I-70, Cottage Home is located on Indy's near east side, bounded by 10th, Oriental, and Michigan Streets. The area takes its name from the style of houses built there in the last quarter of the 1800's, when the area's first residents built modest frame cottages in a variety of styles, most notably the Queen Anne. They showcase turned posts, spindles, gingerbread-trimmed porches, brackets, and fish-scale shingles, the favorite designs of their era.

What's exciting to me is that, more so than Lockerbie and Chatham-Arch, there's still opportunity to be a part of the rehabilitation process in Cottage Home. Several homes are candidates for restoration ... Like many of the city's downtown residential areas, beginning in the 1940s, the area suffered a general decline. Residents lacked incentive to invest in their properties following suburban flight after World War II, the demolition of too many houses to make way for the interstates, and a general disdain of the old architecture.

Finally, people re-discovered their history, and the 150-home community began a renewal. The Cottage Home Neighborhood Association was formed in 1984 and remains as one of the city's most active neighborhood groups. And in 2008, the Indianapolis Historic Preservation Commission voted to approve the Cottage Home Conservation Plan. 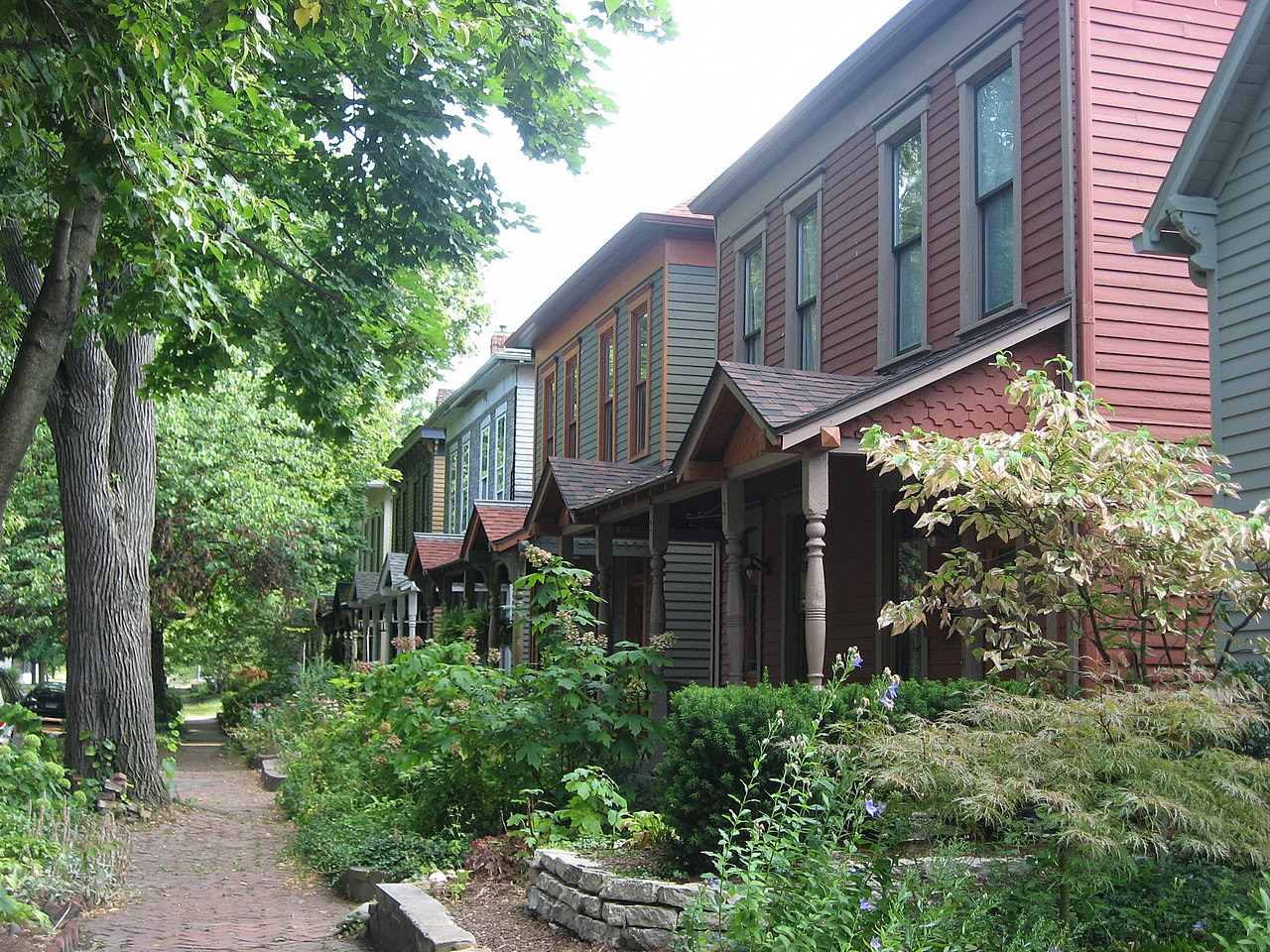 What's been happening lately? Houses are being moved to save them from demolition. Residents, both current and potential, are being educated about the best-practices of restoration. Vacant lots are being purchased to preserve the community. Zones are being changed from industrial to residential. Crime watch and neighborhood clean-ups are on going. Bi-monthly neighborhood meetings as well as a Cottage Home Block Party reflect neighbors who are engaged and committed.
If you're thinking about moving downtown and you're interested in the older homes of Indianapolis with prices starting in the mid-$100s, don't forget about Cottage Home ... call me to help you find what you're looking for!

Posted by Unknown at 2:58 PM No comments: